← more from
Hammerheart Records
Get fresh music recommendations delivered to your inbox every Friday.

Testimony Of The Ancients 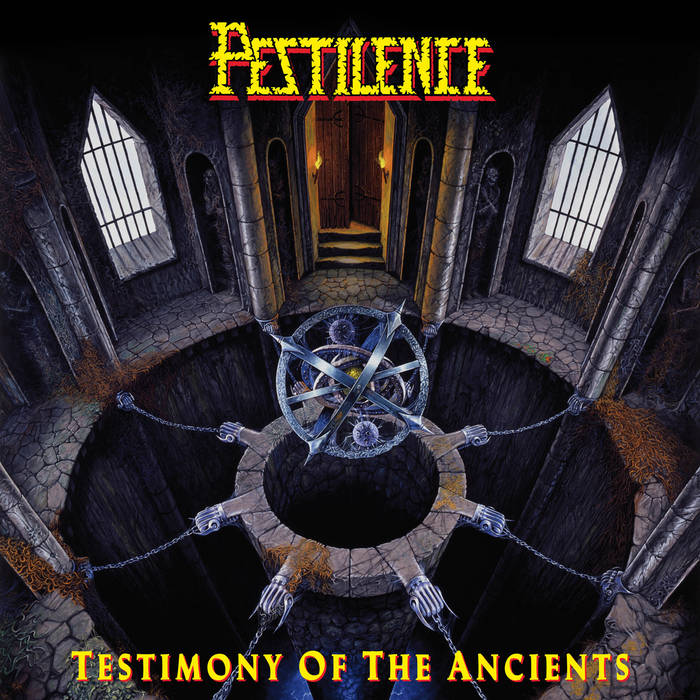 fyeahmetal This album rules! You can feel Pestilence preparing to jump across that chasm on the album cover from the safety of OSDM to the mysterious sphere of prog. The spirit of this record reminds me a bit of early Meshuggah a few years later, but the song structures are more classic and hooky. Great stuff! Favorite track: Stigmatized.

Michał Rz Feluś Reminds me of the high school days in the late 90's. Excellent music, just best of the best. Pestilence rules!

Machine Head Gave this a go because so many people were mentioning it. Great death metal - somewhere between Carcass and early progressive Death. Favorite track: Secrecies Of Horror.

An iconic landmark album within Death Metal. “Testinomy of the Ancients” gets the well-deserved reissue!

Two years after releasing one of the best death metal albums ever to surface from The Netherlands, Pestilence hit jackpot again with their 1991 album “Testimony Of The Ancients”. The biggest differences with their previous effort “Consuming Impulse” are simple: The production is more clean, short intermezzos between all the songs, the average pace is lower and Patrick Mameli has taken over lead vocals.

Pestilence has had a well-deserved place in the first wave death metal elite, mentioned in one breath with the likes of Death, Sepultura, Cynic, Atheist and the likes. Rightly so, because their progression up untill this album is comparable to, say, Carcass. With every album they developed their sound so no release sounds alike but still stays Pestilence undeniably.

Their previous album “Consuming Impulse” was unprecedented in brutality and morbidness. ‘Testimony of the Ancients” is less relentless, but it makes up for that with an onimous dose of morbid melodies, great lyrics and an all out Lovecraftian atmosphere. The highlight of this album is definately the guitars. Patrick Mameli and Patrick Uterwijk are a great tandem, combining melodic (twin) soloing with screeches and crashes of tremolo filled chaos.

Take for example the song “Land Of Tears”. The guitar solo starts out very emotional, almost ballad like and then switches into high gear, so that all listeners who were dreaming away immediately abbandon all hope for solution of the saddening first guitar part. Noteworthy also are the supportive keyboard samples, never obnoxious, always morbid. Other album highlights are the title track (with truly frightening and insane lyrics), ‘Twisted Truth’ with its catchy dynamics, ‘Profetic Revelations’ (excellent chorus) and basically the whole album is perfect. Special attention to the final track (the album sticks together with samples, which are all great by the way) ‘Stigmatized’. This is death metal perfection, combining Slayer, Death and even Iron Maiden to create a masterpiece of metal.

If anything describes this album best, it’s that it’s an interesting union of death metal brutality and progressive metal beauty. Concluding, this is a must-have for all progressive death metal fans and for all who want to know who the true masters and originators of the genre are.