← more from
Hammerheart Records
Get fresh music recommendations delivered to your inbox every Friday. 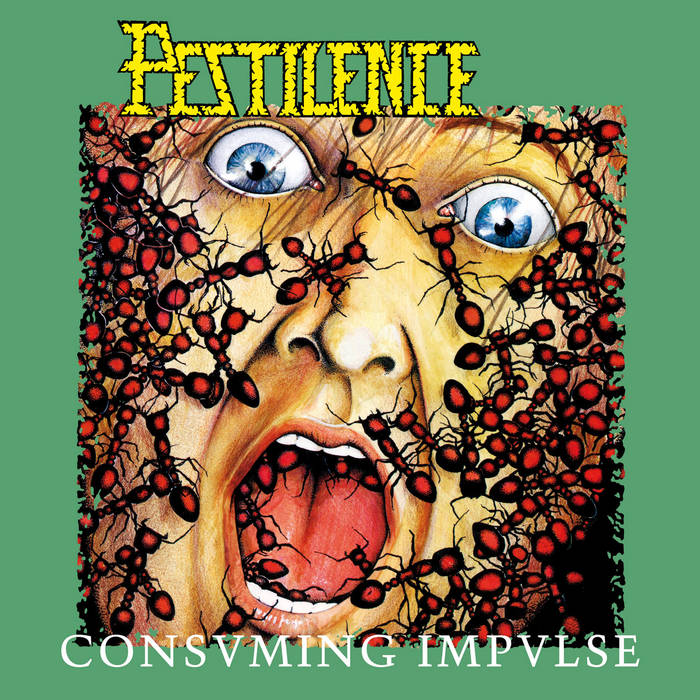 Brandon Corsair Classic pummeling death metal, with vocals that sound like a dying soldier! One of the greats for a goddamn reason. Favorite track: Dehydrated.

cayman_cider Big shout out to a real one. Still one of the best death metal albums ever made. The riffs are chilling, the vocals are haunting and hair-raising. Everything just works perfectly. "Suspended Animation" is practically worth the price of admission alone, especially if you love death metal. Do yourself a favor and let this album swallow you whole. Favorite track: Suspended Animation.

God Stewart The cover art really sums up how this classic album feels better than words can. This is consuming [sic], raw, thrashy death metal, complete with tortured vocals and unhinged, squealing solos. There is an urgency and desperation to these songs that is compelling and straight up uncomfortable at times.
more...

Pestilence had impressed people with their very worthy thrash album "Malleus Maleficarum". But it wasn't until 1989 that this band would create a monster of a death metal album. The band would obviously go on and wow people with there classic album Testimony of The Ancients. Which I rate highly and love the record. But this is easily my favorite Pestilence album and easily in the top five greatest albums of its genre.

Pestilence set the standard and raised the bar to heights other bands would strive to reach throughout the explosion of death metal that would occur from 1989 through to 1993. Much like their brothers Death and Morbid Angel Pestilence came out with their own style and took the death metal scene by storm.

The guitar tone is just the heaviest fucking shit on the planet. The riff work is unmatched and the solos are varied between the two guitar players. You have the standard shredding fast guitar solos, whammy abuse and sometimes slow, melodic lead lines when the songs tempo's change. The album holds your attention throughout with varied songwriting which is cool. Because some death metal albums do fail to keep your attention from start to finish. You have brutal and speedy numbers such as the opener Dehydrated and Suspended Animation. But you also have numbers which are more mid paced and moody. Although that been said the songs do have progressive touches in terms of structure. Swapping in tempo's and crushing you with a nice amount of riffs on offer. The band don't just throw riff after riff after riff and don't revisit them stupidly. In terms of riff work the guitarists are extremely clever and deliver an onslaught off well played thrash infused death metal riffs. One example in "The Process of Suffocation" the verse riff with its intricate chugging riff with the single note tags on the end. Which is also extremely catchy. The second time the riff is played the band variate the tag the second time round just the one time. With a clever drum change which creates a very unnerving feel. This is an example of the ingenious creativity on offer here.

Lets not forget the beyond unreal vocal work of Martin Van Drunen, which he basically uses the music on the album to declare his insanity to the world. Giving character and depth to death metal vocals. Even though I love his work in Asphyx I feel he would never put down a performance as amazing as this one. Lastly the drum work is superb creatively mixing up patterns and double kick variations. The bass is audible enough and gives that punch adding a good low end to the riffs.

It's quiet hard to put into words how amazing this record really is. Its very hard to choose highlights but for the sake of the review it would have to be. "The Process Of Suffocation" with perhaps the most thrashy and intense riffs on offer here, with some cool changes of tempo and the clever riff work described earlier in the review. "The Trauma" with the most haunting and menacing riffs on the record, building in tempo from the intro, the lyrics add to the horrific atmosphere on this song with an awesome use of voice over in the mid section. "Out Of The Body" with its instantly memorable intro the riff then drum fill. This has some of my favorite faster tempo riffs. It also sports a quality slow paced mid section before coming back to full tempo, I admire the structure of the song a lot.

The album will have you locked up in your room. In the dark rolling in your own sick and eating your own excrement in a mad frenzy ensued from the sheer insanity displayed on this record. Unmatched and on the same level as Morbid Angel's "Altars of Madness" record, Death's "Leprosy" and Dismember "Like An Ever Flowing Stream".